You and a friend have set out on two separate expeditions; to reach the arctic pole of both hemispheres, and a bet has been made, who can reach the pole first. The scene is set and the game is afoot

Made for IGI Game Jam

You start out with 10 provisions and 3 cards to chose from, 2 traveling cards and 1 camp card. You pick a card, your sled moves according to the selected card, the deck reshuffles and it's your opponents turn.

Each traveling card gives you random terrain and random weather. The better the terrain, the further you can go. The worse the weather, the more provisions you spend.

Let's take a look at examples of some cards:

Reach the pole before the other player reaches theirs but watch out to not spend all of your provisions!

Originally made with the beta version of Game Maker 2, I had some interesting development restrictions, such as limited amount of objects I was allowed to use. I managed to bypass some of the restrictions with tricks like reusing the same text object for all the texts.

There's a chance I might create a physical card game based on the design of this game jam. It sort of depends on balancing projects with available time.

Special thanks to my friend Þórir for lending me his laptop for the project! 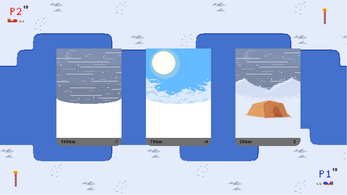 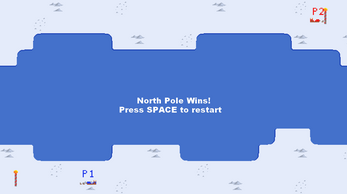